How Swift Engineering is responding to the Coronavirus pandemic – Learn More

Swift Engineering, Inc. flew the first fully autonomous flight demonstration in the port city of Kobe, Japan on July 21, 2018. In attendance during the event was Governor of the Hyogo prefecture, Toshizo Ido, and Mayor of Kobe City, Kizo Hisamoto as well as other government officials and media. The flight took place in Meriken Park, located in the Port of Kobe City in the Hyogo Prefecture. “We are proud and honored to be a trailblazer in the next industrial revolution of autonomy and robotics. The vision of innovation embraced by the Hyogo Prefecture and the city of Kobe will impact worldwide urban aviation” said Rick Heise, President and Chief Strategy Officer of Swift Engineering. 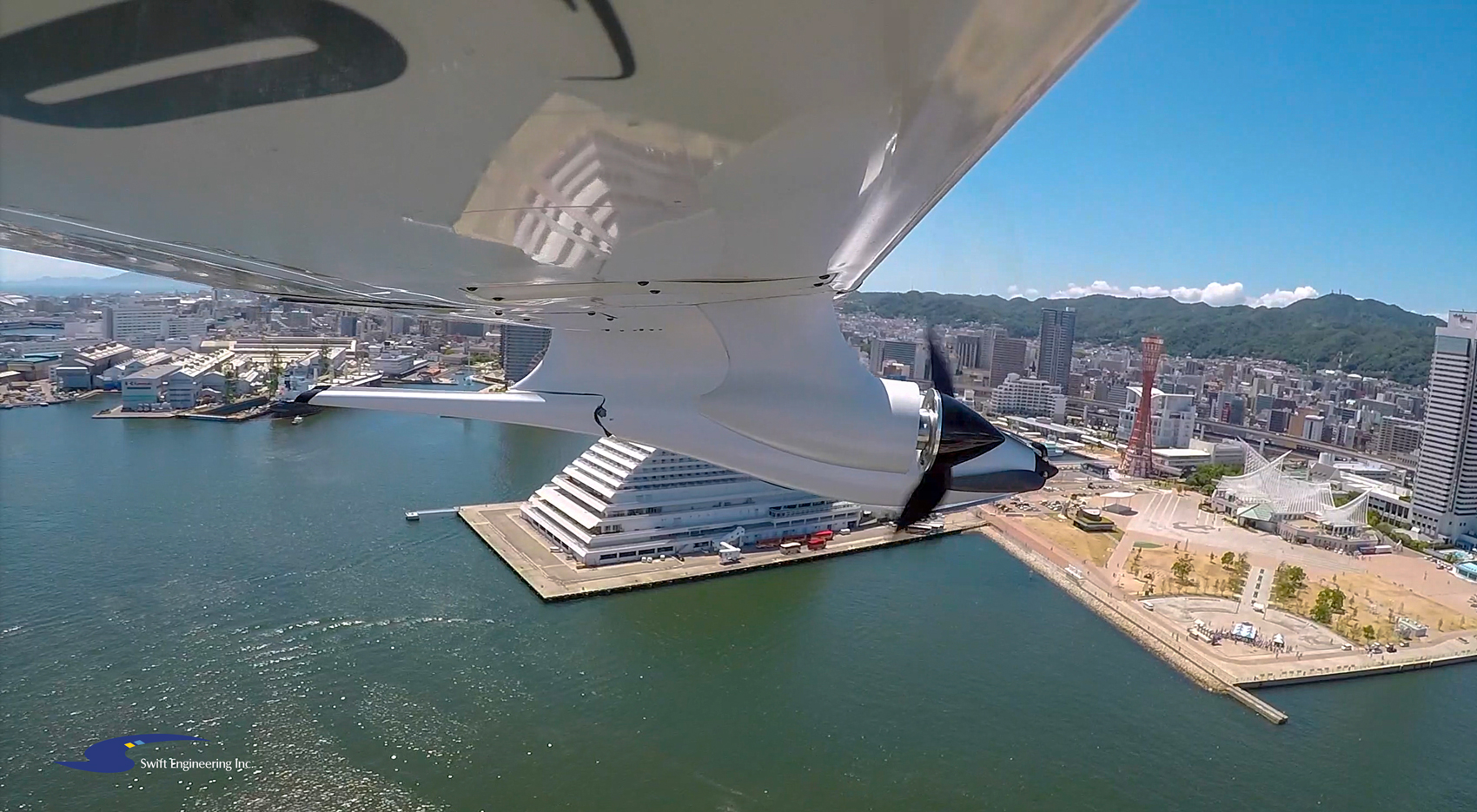 “We are all very excited to be a part of this historic event.” Said Andrew Streett, Vice President of Technology and Chief Scientist at Swift Engineering. “This was a collaboration with the Osaka Aviation Bureau, the city and port of Kobe, which cumulated in the Swift020 flying over a ‘densely inhabited district’ a standard used in Japan to describe an area of 4,000 people per 1 sq kilometer. The teamwork between multiple agencies was key to the success of this demonstration.” Prime Minister Shinzo Abe is expected to release drone legislation, including beyond the line of sight provisions before the end of 2018. Streett added “This is a preemptive success before the release of the regulations for drone use in Japan. This flight provides a solid foundation for a successful progression towards Prime Minister Abes’ goal.” The Swift020, the first UAS featuring X-Blade Technology™, is the culmination of over 18 years of research and development in unmanned systems. The Swift020 Unmanned Air System (UAS) vertical take-off and landing (VTOL) technology takes off and lands anywhere and transitions to efficient fixed-wing forward flight without additional launch and recovery equipment allowing it to reduce operational time and cost. The Swift020 UAS is a family of systems servicing linear infrastructure, oil and gas, maritime, emergency services, delivery, agriculture, scientific research, surveillance and security markets. Swift-Xi is a Japanese joint venture by Swift Engineering, Inc. headquartered in San Clemente, California, USA and the Kobe Institute of Computing located in Kobe, Japan. Swift-Xi provides data and IT services, logistics, and full-service operations of autonomous and robotic technologies in Japan and around the world. Swift020 Kobe Japan from Swift Engineering on Vimeo. Swift Engineering, Inc. is an innovation company providing products, technologies and fully integrated product development solutions from ideation to market. Swift has over 30 years of design, engineering and build heritage in intelligent systems, and advanced vehicles; including autonomous systems, helicopters, submarines, spacecraft, ground vehicles, and robotics. CONTACT: Kanna Place, Swift Engineering, Inc. (949)492-6608 kplace@swiftengineering.com